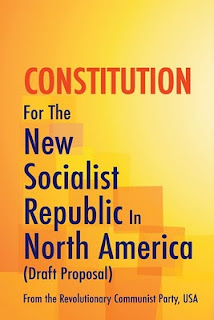 Take a radical step into the future!
Come for a discussion of the Preamble of this unique and visionary document -- CONSTITUTION for the New Socialist Republic in North America. This Constitution (Draft Proposal) is written with the future in mind. It is intended to set forth a basic model, and fundamental principles and guidelines, for the nature and functioning of a vastly different society and government than now exists --  a socialist society in transition to communism.

The New Socialist Republic in North America could only have been brought into being as a result of heroic, self-sacrificing struggle carried out by millions and millions of people who had been forced to live under a system of exploitation and oppression in the former United States of America; who could no longer tolerate the continual outrages and injustices perpetrated by the system of capitalism-imperialism and the structures and institutions of power and repression which enforced all this with violence and brutality as well as lies and deception; who refused to any longer accept that this was the best possible society and world, and were increasingly aware of and inspired by the possibility of a radically different and better society and world; and who therefore rose up, with the leadership of the Revolutionary Communist Party, to defeat, abolish and dismantle the imperialist system in the former USA and its institutions and apparatus of repression and violence.  (read more here)