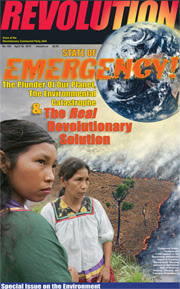 On December 11, UN talks on climate change ended in Cancun, Mexico. In the months going into Cancun, it seemed that the cynical and bitter watchword among major governments of what could be accomplished at the talks was "lower expectations", and then, "lower them again." And like the talks held in Copenhagen in December 2009, the Cancun summit moves the world no closer to seriously dealing with the pressing environmental emergency on this planet.
Earth's ecosystems and humanity face a multifaceted environmental emergency—the destruction of forests and other natural habitats; extinction of species; acidification of the oceans and wiping out of ocean life; pollution and degradation of water, air, and soil. Climate change is a leading edge of this emergency, is already occurring and threatens to become unstoppable. This is why the failure of the world’s governments in Cancun demands serious and deep analysis - and strategic thinking and action.
Our view: the future of earth's ecosystems can't be left in the hands of the U.S. and other powers, who showed once again at Cancun that they are incapable of doing anything but using such talks to pursue their own interests at the expense of the natural world and humanity. But there is a way out! The needed basic technology, knowledge, and science exists to combat the problem of climate change, and there is potentially a tremendous desire latent among the world's people that could be mobilized, but is being blocked by this system. We need revolution and a new state power to generate all these potentials in the way they must go.