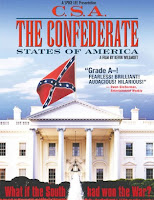 What if the south had won the Civil War? The mockumentary chronicles the story of how Jefferson Davis led the Confederate Army to victory in the "War of Northern Aggression." In the form of a BBC documentary with academic historian talking heads, the idea is that the "documentary" is being shown on American TV for the first time and so it is interspersed with American TV commercials -- for present day products relating to slavery.

CSA explores a possible alternate history of North America, where the economy remains slave-based up until the present. But its portrayal of this alternate history reveals a dominant culture and ideology that is disturbingly close to reality in the US today.

The screening will be followed by a discussion.