"I Had an Abortion" - video showing & discussion March 6, Sunday, 7 pm at Revolution Books 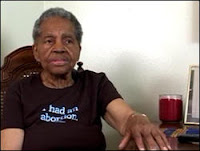 "I Had an Abortion"

a film by Gillian Aldrich and Jennifer Baumgardner

Each year in the US, 1.3 million abortions occur, but the topic is still so stigmatized it’s never discussed in polite company. Powerful, poignant, and fiercely honest, I HAD AN ABORTION tackles this taboo,
featuring 10 women – including feminist Gloria Steinem – who candidly describe experiences spanning seven decades, from the years before Roe v. Wade to the present day. Filmmakers Jennifer Baumgardner (author of Manifesta: Young Women, Feminism, and the Future) and Gillian Aldrich insightfully document how changing societal pressures have affected women’s choices and experiences.

Cutting across age, race, class and religion, the film unfolds personal narratives with intimate interviews, archival footage, family photos and home movies. Arranged chronologically, the stories begin with Florence Rice, now 86, telling without regret about her abortion in the 1930s. Other women speaking out include Marion Banzhaf, who, inspired by both the Miss America protests and the Stonewall rebellion, fundraised on her campus to pay for her abortion, and Robin Ringleka-Kottke, who found herself pregnant as an 18-year-old pro-life Catholic.