Libya -- Uprisings in the Middle East, and the Role of the US - Larry Everest & Stephen Zunes, March 21, Mon., 7 pm at Revolution Books

Saturday: Britain and the USA have bombed Libya with more than one hundred Tomahawk cruise missiles. These are not precision guided weapons but weapons of mass destruction that will create many civilian casualties in Libya. This is a war for imperialism -- not to "help" the Libyan people, and no good can come of it. 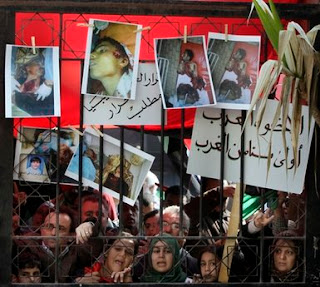 "Recent events in the Middle East and elsewhere have demonstrated the power of largely nonviolent civil insurrections – mobilizing students, workers and other progressive elements of civil society – in throwing off repressive regimes. They have challenged assumptions of both reactionary Islamists and U.S. imperialists regarding popular empowerment and bringing down dictators. While such unarmed insurrections have not led to an immediate socialist transformation, they have be able to open civic space for labor, women, peasants, and other historically disenfranchised elements of society to work for more radical change."

“The battle in Libya and the unprecedented uprisings across the Middle East spring, at root, from well over a century of colonial and imperial domination of the region, and the horrific toll it’s taken on the people.  The great unjustness of that order has been sharply exposed, and notions of its permanence profoundly shaken.  Yet the U.S. and other powers continue to maneuver, and the region’s ruling economic and political structures so far remain in tact.  So big questions are sharply posed:  What will it take for the region’s people to be liberated?  What kind of leadership is required?

http://www.huffingtonpost.com/stephen-zunes/libya-the-united-states-a_b_828199.html
Libya, the United States, and the Anti-Gaddafi Revolt
by Stephen Zunes


http://www.revcom.us/a/224online/mubarak-en.html
HOSNI MUBARAK: A profile of an American-Backed Tyrant
by Larry Everest

Stephen Zunes is a professor of Politics and chair of Middle Eastern Studies at the University of San Francisco and serves as a senior analyst for Foreign Policy in Focus. He is the author of Tinderbox: US Middle East Policy and the Roots of Terrorism (Common Courage), Western Sahara: War, Nationalism, and Conflict Irresolution (Syracuse), among other books, and writes for Truthout, Alternet, ZNet, and the Huffington Post. He has been named by Campus Watch as one the dozen most dangerous Middle East scholars in the United States.