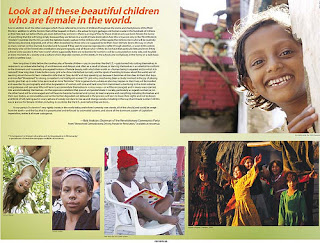 "Look at all these beautiful children who are female in the world.  And in addition to all the other outrages which I have referred to, in terms of children throughout the slums and shantytowns of the Third World, in addition to all the horrors that will be heaped on them - the actual living in garbage and human waste in the hundreds of millions as their fate, laid out before them, yes, even before they are born - there is, on top of this, for those children who are born female, the horror of everything that this will bring simply because they are female in a world of male domination.
And this is true not only in the Third World. In 'modern' countries like the U.S. as well, the statistics barely capture it: the millions who will be raped; the millions more who will be routinely demeaned, deceived, degraded, and all too often brutalized by those who are supposed to be their most intimate lovers; the way in which so many women will be shamed, hounded and harassed if they seek to exercise reproductive rights through abortion, or even birth control; the many who will be forced into prostitution and pornography; and all those who - if they do not have that particular fate, and even if they achieve some success in this 'new world' where supposedly there are no barriers for women-will be surrounded on every side, and insulted at every moment, by a society and a culture which degrades women, on the streets, in the schools and workplaces, in the home, on a daily basis and in countless ways."