The Imperialist Suicide Epidemic in India, with Larry Everest 6-28-11 at 7 pm 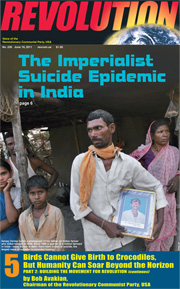 Between 1995 and 2009, 241,679 farmers in India committed suicide, and by the end of 2010 the number had probably risen to 250,000—a quarter of a million people. In 2009 alone, 17,638 farmers committed suicide—an average of one every 30 minutes. What has caused this largest wave of recorded suicides in human history? What role has the U.S. and the global capitalist system played? How does this show the urgent need for communist revolution and creating liberating societies where people could flourish and never think of ending their lives? 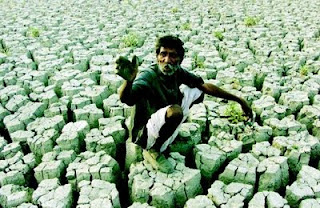 A farmer in India swallows a bottle of pesticide and falls dead. And the tragedy of this suicide is compounded. His wife and children now have to pay the debts he owed that drove him into such desperation. They may not have a way to farm the land. They may be forced to work another farmer's field for 45 cents a day.

Since 1995, about a quarter of a million farmers in India have committed suicide. Most are small farmers, more than 85 percent were deeply in debt. In 2009, 17,638 farmers killed themselves—an average of one every 30 minutes.

In a country the U.S. upholds as a model of capitalist democracy, tens of thousands of farmers are driven to kill themselves because they have gone deep into debt to feed their families.