"Communism: A Whole New World and the Emancipation of All Humanity-Not ''The Last Shall Be First, and the First Shall Be Last.'": Getting into the BAsics 8-2-11 at 7 pm 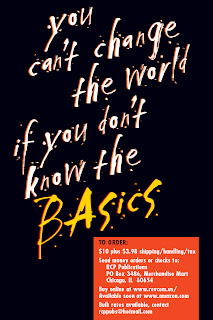 "A Whole New-and Far Better-World": Getting into the BAsics
Discussion of Chapter 2 of BAsics, from the talks and writings of Bob Avakian No experience needed, just come to listen or share your favorite quote, and talk about why:
BAsics is a new book of quotes and essays from Bob Avakian, Chairman of the Revolutionary Communist Party, USA. BAsics concentrates more than 30 years of Avakian's work on everything standing between humanity and complete emancipation into a single concise book of essential quotes and short essays.

"You can't change the world if you don't know the Basics"