Tuesday, August 23 at 7 pm, come to Revolution Books for a discussion of:

100,000 Run for Special Issue on BAsics A Plan to Shake Up and Wake Up the Campus 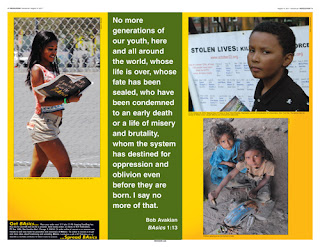 On August 23, Revolution newspaper will publish a special 8-page all-color issue of the paper that will introduce people to BAsics. The issue will focus on quotes from BAsics, and quotes from different people who have read BAsics and have something to say about it. 100,000 of these will be printed and take the next several weeks—with a major emphasis on the weeks from August 24 to September 7—to get them out in a massive way, mainly focused on college campuses, though with some emphasis as well on high schools."

"thousands, no tens of thousands, of students by the time the leaves turn having not just heard about and been exposed to this work but, in many cases, beginning to engage it, to learn about the leader who brought it forward, and to make contact, in different ways, with the movement for revolution he’s leading.

"This is critically important. The campuses should be a real strength of the movement for revolution. They should be places where students are debating and wrangling over these ideas and daring to dream how the world could be radically different. They should be places which infect the whole society with ferment over ideas more generally. They should be sites of political struggle and upheaval... of cultural revolt... of philosophic debate... of pioneering new relations between people ... of young people demanding the truth, and insisting on living by it."


Come for a discussion and help make plans to go out to campuses with this special issue.