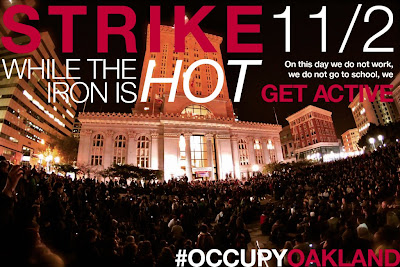 GENERAL STRIKE & MASS DAY OF ACTION
called by OCCUPY OAKLAND
Wednesday Nov. 2, 2011
Mass Convergences at 9am, 12noon, 5PM
Everyone to the Streets!  No Work! No School!
CONVERGE ON DOWNTOWN OAKLAND TO HELP SHUT DOWN THE CITY.

Revolution Books wholeheartedly joins in supporting the November 2 General Strike & Mass Day of Action called for by Occupy Oakland!  We will close our store for the day in solidarity, and bring our books and literature downtown as part of the general strike. Join us!

We urge everyone – individuals, groups, organizations, schools, businesses to do the same. Walk out of school, get your unions to call a one day walk out; don’t work, come down to Oscar Grant Plaza.  The whole world will be watching Oakland on November 2: we must make a powerful statement that Occupy Oakland and the whole Occupy Movement Will NOT Be Shut Down – but our resistance will become even broader and more determined.  All this can contribute greatly to the emergence of a new, growing movement for revolution that can sweep away the horrors of imperialism and set to work creating a whole new world.

"From New York to Denver to Oakland and other cities, the Occupy movement is coming under brutal and heartless attacks from the police and the powers behind them—and the people at the Occupy encampments and their supporters are responding with determination and courageous resistance.

"OWS, in its audacity and with its cooperative ethos, is challenging the numbing atomization in society, where people feel isolated and left to their own. A new generation of young people is stepping to the fore, taking responsibility, and setting an example. Big questions about economics, the oppressive power structure, and the nature of capitalism are getting posed. All of this is causing concern and consternation in the ruling class—which is striking back, with police attacks as well attempts to pen in, channel, and derail this movement.

"This major development in U.S. society is important, and it’s crucial that this movement continue and intensify and rise to new challenges. As the Occupy movement shines the spotlight on the inequalities and injustices of the system we live under, those in the midst of the struggle are grappling with, debating over, and summing up some crucial lessons…." from Occupy Wall Street, Occupy Everywhere: Police Attacks… Courageous Resistance… Big Stakes for the People

Fight the Power,
Transform the People,
for Revolution!