Support the Prisoner Hunger Strike – Demand an End to Torture 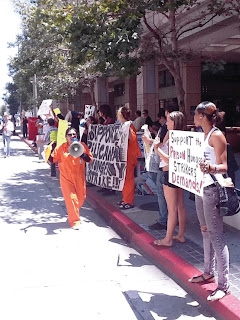 
Wednesday, October 12: support California prisoners on day 16 of their historic hunger strike at an interactive installation at UC Berkeley, featuring visuals, readings of prisoners' letters, and family members. Students and professors, family members with loved ones in prison, members of the legal, human and civil rights community -- join us in reading prisoner letters, holding photos of prison conditions, sharing your thoughts, discussing how to support the prisoners. Please forward this call widely, announce in classes, email us messages of support to be read.

Think about everything that makes you human… that keeps you physically and mentally alive… that connects you with the world and other people… that gives you a reason to live, to love, to learn and think…. All this is what the SHU tries to extinguish. In the SHU you're locked up in a small, windowless concrete cell 23 hours a day, with minimum human contact and maximum sensory deprivation, for years and sometimes decades.

“I’m ready to take this all the way,” says J. Angel Martinez, one of the strike leaders at Pelican Bay State Prison. “We are sick and tired of living like this and willing to die if that’s what it takes.”

Over 6,500 prisoners across California went on hunger strike from July 1 to July 20, demanding to be treated as human beings; and an end to barbaric, inhumane conditions and long-term solitary confinement -- a form of torture. Prisoners resumed the hunger strike on September 26, with nearly 12,000 joining, because the California Department of Corrections and Rehabilitation (CDCR) reneged on its promise to meet their 5 demands. (Prisoners’ demands )

The CDCR, backed by Gov. Jerry Brown, is retaliating against hunger strikers – threatening to put them in the SHU for going on hunger strike. “We’re freezing," strike leader Ron Yandell told an attorney, as quoted in the New York Times. "The air-conditioner is blowing. It’s like arctic air coming through, blowing at top speed. It’s torture. They’re trying to break us.”

On October 4, Amnesty International called for "swift implementation of reforms to California security housing units," and condemned "conditions in the SHUs at Pelican Bay and other facilities, where several thousand prisoners are held in isolation, confined to windowless cells for more than 22 hours a day, with minimal human contact and no work, recreational or educational programs."

Prisoners write: "our sacrifice now will mean a more humane world for us in the future…many of the conditions for prisoners being held in Guantanamo Bay are really better than SHU prisoners in Pelican Bay."

All of us have a moral responsibility to stand up for the basic rights and humanity of those held behind bars, and build a determined movement outside prison walls demanding CDCR grant the prisoners' just demands and immediately halt its retaliation against hunger strikers.

This reading/installation has been initiated by readers of Revolution newspaper and other supporters of the prisoner hunger strike. Contact: D'Andre: Deandre44@gmail.com or 510-926-5207

For more information on the hunger strike, see:


Voices of those cast off by the system