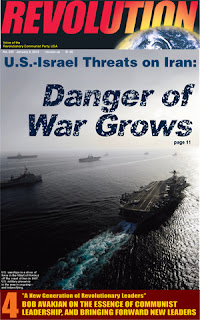 The danger of a U.S.-Israeli war on Iran is escalating rapidly. The U.S. and its allies are ramping up their all-around assault on Iran, including new crippling sanctions, and openly threatening to attack. Ground is being laid daily in the headlines and statements by politicians of every stripe in mainstream U.S. politics calling for aggression against Iran—all justified by unsubstantiated assertions that Iran is pursuing nuclear weapons.

The nuclear issue, however, is not the underlying factor intensifying the U.S.-Iran clash. That conflict is part of something much larger: a sharpening battle for dominant influence across the entire region, a battle with profound global implications.