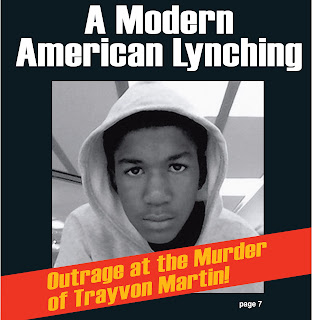 
Meet at 14th and Broadway in downtown Oakland. 4pm Friday.


On February 26, 2012, 17-year-old Trayvon Martin went out to buy some snacks at the nearby 7-Eleven. George Zimmerman, the neighborhood watch captain in a small gated community in Sanford, Florida, was driving around in his SUV. Zimmerman called 911, saying Martin looked "real suspicious"—i.e., he was a young Black male, walking around in a hoodie. After the 911 dispatcher told Zimmerman not to pursue the youth, Zimmerman followed Trayvon Martin, got out of his car and then confronted Martin. Zimmerman was carrying a 9-millimeter handgun. Trayvon Martin was carrying a bag of Skittles and a can of iced tea. There was yelling, then a gunshot. Trayvon Martin lay face down in the grass with a fatal bullet wound to the chest. Zimmerman was taken into custody, questioned and released. To this day, he has not been arrested and charged with any crime.

THIS IS AN OUTRAGE. EVERYONE OUT INTO THE STREETS!