Day of Outrage - April 10 - We Are All Trayvon Martin 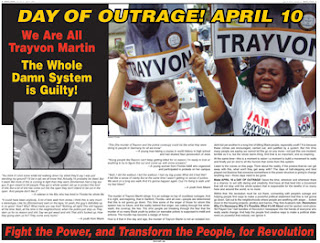 Justice for Trayvon Martin is NOT a “Black People’s Issue”: If You Don’t Fight for It, You Lose Your Humanity!
http://revcom.us/a/265/justice-for-trayvon-martin-is-not-a-black-peoples-issue-en.html

A glance at any of the thousands of photos of the recent protests demanding justice for Trayvon Martin reveals that this case has struck a deep chord among Black people of all ages. At the same time, these photos reveal how white people and other non-Blacks have almost entirely ignored and appeared to have gone along with this modern-day lynching. (read article here)


*****
We Are All Trayvon Martin! The Whole Damn System is Guilty!

“You think if I shot some white kid walking down my street they’d say I was just standing my ground? I’d be in jail, we all know that. Actually, I’d probably be dead. But it seem like more of this is coming to light than they want. Zimmerman had a big ass gun. A gun meant to kill people. They got a whole system set up to protect this kind of shit. But a lot of shit has come out into the open they don’t intend to be out in the open.  And people don’t like it.”        —A veteran in his 60s who has lived in Florida his whole life

The murder of Trayvon Martin stings. It is an outrage on top of countless outrages. And it is right, and inspiring, that in Sanford, Florida—and all over—people are determined that this is not gonna go down. This time some of the anger of those for whom this system has no future, and the reality behind that anger, are cutting through the whitewash, the coverup, the lies. This time people are breaking through the fear that the murder of so many Black youth by police (or wannabe police) is supposed to instill and enforce. The hoodie has become a badge of honor.

How is it that in this day and age, the murder of Trayvon Martin is not an isolated incident but yet another in a long line of killing Black people, especially youth? It is because these crimes are encouraged, carried out, and justified by a system. But this time, many people are saying we cannot let this go on any more—not just this one incident, terrible as it is, but the whole damn thing. And that is so important, and so inspiring.
At the same time—this is a moment to seize—a moment to build a movement to really and finally put an end to all the horrors that come from this system.

Make APRIL 10 a DAY OF OUTRAGE! Seize the time, wherever and whenever there is a chance, to act with daring and creativity. And have all that feed into a movement that will not stop until the whole system that is responsible for the deaths of so many, here and around the world, is no more.
Fight the Power, and Transform the People, for Revolution.