March with the Internationalist Contingents on May Day! 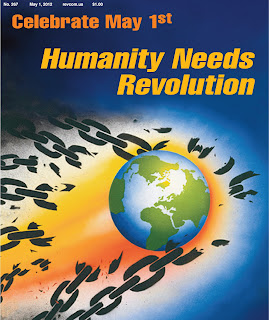 May Day 2012... the world is a horror for billions, but it doesn’t have to be this way. Another world is possible, and in the face of this horror, the international proletariat, and people across this country and the world, declare their determination to fight for a world free of exploitation and oppression.

May Day 2012... the Occupy movement, refusing to accept the world as it is, has called for demonstrations on May 1 to advance that movement.

May Day 2012... a time to majorly promote and popularize the work and vision of Bob Avakian, the leader of the Revolutionary Communist Party.  Because of BA and the work he has done over several decades summing up the positive and negative experience of the communist revolution so far, and drawing from a broad range of human experience, there is a new synthesis of communism that has been brought forward—there really is a viable vision and strategy for a radically new, and much better, society and world.

"American Lives Are Not More Important Than Other People’s Lives"


Sat 4/28 – 10am:  Meet at Mosswod Park (MacArthur & Broadway in Oakland) to take the BA Everywhere campaign to neighborhoods to meet thousands of people with Revolution newspaper and BAsics from the talks and writings of Bob Avakian.


Sunday, April 29:  May Day Fundraising Dinner to Get Everywhere! Lake Merritt Lodge at 2332 Harrison Street, Oakland from 6-10pm.  $10 & up.
MAY DAY Tues 5/1 – 10am Oscar Grant Plaza (14th & Broadway) 3pm at Fruitvale Bart (near Fruitvale & International in Oakland)
Friday, May 4, 7pm: Meet the Revolutionaries!  Open House at Revolution Books.  Learn more about Bob Avakian, his work, and about the BA Everywhere Campaign.