Sunday, June 24th, 7 p.m. Don't miss this showing of the PBS movie: “Slavery by Another Name” After the Civil War, Jim Crow came to define the entertainment of that era, and the symbolism of Blacks in the South. .... The reality, what Slavery by Another Name demonstrates, I think, is that in truth, since the beginning of the 20th century, a new form of forced labor involving hundreds of thousands of people, and terrorizing hundreds of thousands of other people, had emerged in the South, that amounted to what I call “neo-slavery,” and we should call it what it was, the age of neo-slavery. --from an interview with author Douglas Blackmon published in Revolution newspaper. (Click here to read the entire interview)

Based on Blackmon’s research and book, Slavery by Another Name, the film spans eight decades, from 1865 to 1945, revealing the interlocking forces in both the South and the North that enabled this “neoslavery” to begin and persist.  Using archival photographs and dramatic re-enactments filmed on location in Alabama and Georgia, it tells the forgotten stories of both victims and perpetrators of neoslavery and includes interviews with their descendants living today.

Discussion after the film. 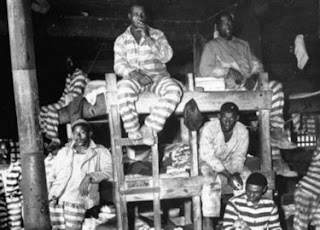