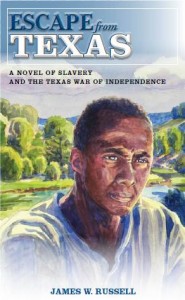 James W. Russell discusses his book, Escape from Texas: A Novel of Slavery and the Texas War of Independence

In 1828 James, a slave, arrives in Texas, brought by his owner, Samuel Bingham. Texas is then a part of the Mexican state of Coahuila y Tejas. James comes to Texas because he has no choice. But once there, he finds a postrevolutionary country where slavery is on the way out and his freedom is a real possibility. His owner, though, is determined to take advantage of the low cost of land in Texas to build up a farm into a cotton plantation with the use of slave labor. Over the next nine years James will experience and participate in a series of wrenching events that marked the origins of the Lone Star State. (Buy the book here.)


Set in the years surrounding the 1836 Texas War of Independence, Escape from Texas is a solidly researched examination of the clashing aspirations of slaves, slave owners, Indians, and Mexicans during a turning point of the westward expansion of the United States.

***
James W. Russell was born in New York and grew up in Oklahoma. Active in the 1960s civil rights and antiwar movements, he was the first editor of New Left Notes, the national newspaper of Students for a Democratic Society. He received a Ph.D. in sociology from the University of Wisconsin and has taught at universities in San Francisco, Texas, Oregon, Mexico City, and Connecticut, where he currently teaches at Eastern Connecticut State University.  Escape from Texas is his seventh book.