This event will be webcast "LIVE" on this webpage in English and in Farsi.
(You need adobe Flash Player installed to view this webcast. Download here) 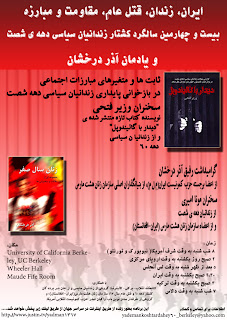 Vazir Fathi, author of a newly released book, “Interview with Galindo Pohl,” a book of the testimony of political prisoners in meetings with an envoy of the U.N.  Vazir spent 10 years of his life in the torture chambers of the Islamic Republic of Iran. He will speak about what took place in the infamous dungeons of Evin, Ghezel Hesar and Gohar Dasht … while the whole world kept silent!

Mona Amiri, one of the political prisoners of the 1980's and a member of the March 8 Women's Organization (Iran –Afghanistan), will speak in memory of the life of Azar Derakhshan, a prominent member of the Communist Party of Iran (MLM) and co-founder of the March 8 Women Organization (Iran- Afghanistan). Azar was one of the main organizers of the March to Abolish All Unequal laws and Punishment Against Women by IRI in March 8, 2006, this was the biggest demonstration of Iranian women outside Iran. Azar and her friends raised: “No to Imperialism No to Islamic Republic of Iran, another world is Possible!” Azar lost her 11-year battle against cancer on May 26, 2012. “Women of Year Zero” is her newly released book of her writings and speeches.


At this crucial moment the US and it's allies get ready for yet another war of aggression this time against IRAN.

And the savage regime of the Islamic Republic of Iran has committed immense crimes against its own people, including massacring tens of thousands of women and men revolutionary political prisoners in the summer of  1988, in a matter of just a few days while the whole world kept silent - a silence maintained to this very day!

We refuse to go along with either!

We commemorate the 24th anniversary of the massacre of political prisoners in Iran (Summer of 1988); and remember the life of our beloved revolutionary Azar Derakhshan in this way:

No to Imperialism, No to Islamic Republic of Iran!
Another world not only is necessary but it is possible more than ever!

Women of Year Zero the collections of writings and speeches by Azar Derakhshan, and Interview with Galindo Pohl the newly released book of prison testimonies will be available.

Sponsors: Revolution Books Berkeley; group of ex-political prisoners and survivors of the Massacre of 88; March 8 Women Organization (Iran-Afghanistan); and supporters of the New Synthesis of Bob Avakian Chair of Revolutionary Communist Party.