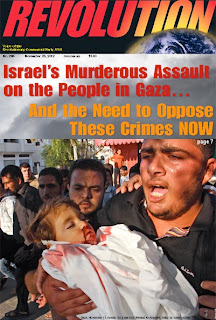 STOP the War on Gaza!
Stand Against the US Support of Israel!
Support the People of Palestine!

Revolution Books strongly urges everyone to stand against this attack and endorses this protest organized by activists in the Bay Area Arab community, allies and supporters of Palestine.

Israel's Murderous Assault on the People in Gaza...And the Need to Oppose These Crimes NOW
by Alan Goodman

Israel's assaults on Gaza are taking place under cover of darkness—literally. Israeli missiles and bombs have, at this writing, knocked out power in Gaza, leaving people, hospitals, homes, and emergency responders without light. What few reports from Gaza make it into mainstream media coverage portray a reporter standing in pitch dark, describing sonic booms, earth-shaking bombs, and flames erupting high into the sky. The Israeli assault has already killed elderly people, children, and many, many other people who could not possibly be considered "combatants" in any military activity originating in Gaza.

One of those killed by the Israelis was the 11-month-old son of Jihad Misharawi, a BBC journalist who lives in Gaza. An Israeli missile hit Misharawi's home on November 14, early in the assault, killing both his son and sister-in-law. When the Israeli missile hit Misharawi's home, there was no military activity observed in his residential neighborhood. After the Israeli missile hit Misharawi's house, his BBC editor tweeted, "if Israel can kill a man riding on a moving motorbike (as they did last month) how did Jihad's son get killed." This murder of the 11-month-old child and the sister-in-law of a BBC journalist is part of a long record of Israeli (and U.S.) killings and terror against even mainstream reporters to keep the world from seeing what Israel is doing to the Palestinians.  [read entire article here]