Author Ann Pancake: Strange As This Weather Has Been 2-19-13

7 pm Tuesday, February 19
Author Ann Pancake discusses her novel
Strange as this Weather Has Been 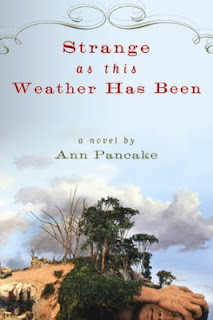 Based on interviews and real events, Strange As This Weather Has Been features a West Virginian town in the midst of the latest coal boom, and plagued by the mountaintop removal strip mining that is ruining what is left of their mountain life. As the mine turns the mountains to dust and wastewater, workers struggle with layoffs and children find adventure in the blasted moonscape craters. And down below, the hollow’s inhabitants live with the constant threat of a black flood that could wash out their world without notice.

This story of lives suspended by danger is delivered through the perspectives of several members of one family. Ultimately, through their eyes, we come to discover the very real threat of destruction that looms in the landscape and in their home.

What people are saying about Strange as This Weather Has Been:


"Pancake...makes her point in Strange as This Weather Has Been in a powerful, sure-footed and haunting way: People aren't dirt. But they know when they're being treated like dirt, whether in the Lower Ninth Ward or the hills of West Virginia." - New York Times

From the tortured belly of the Appalachians comes a novel consuming in its desire to reveal the depth of grief caused by mountaintop removal. In Strange as This Weather Has Been, debut novelist Ann Pancake employs a poverty-stricken West Virginia family—a couple and their four children—to tell a story of catastrophic loss and redemption. These are characters you will love even before you begin the book, for they represent the people who are living in those blown-apart mountains and will keep on living there after you’ve read the last page.  Orion Magazine

"...one of the bravest novels I have ever read."  Wendell Berry