Django Unchained discussion of the movie 2-5-13

Carl Dix on Django Unchained from Revolution Books on Vimeo.

Django Unchained has generated a lot of controversy. Spike Lee has called for a boycott of the film. Others have trashed it for portraying Black people as clowns, for its violence and for the many times the N-word is heard. These folk think this movie is terrible. 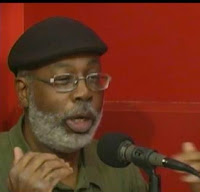 But Carl Dix, a founding member of the Revolutionary Communist Party says the move is "fine"!
He says "Django Unchained has put before millions of people the ugly reality of the illegitimacy of the violence used to enforce slavery".  Come to Revolution Books for Carl's full video presentation and response to the critics including Spike Lee, Kimberly Ellis and Cecil Brown.

And then we'll get into it!