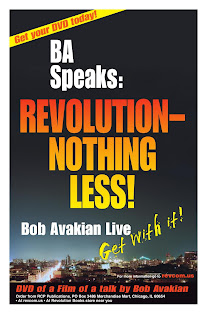 June 20, Thurs. 7 p.m.Disc 2, Chapter 4 : The Election Hustle: "If The Draw You In, They Win. Seizing on Contradictions of the System to Prepare for Revolution.”
Government spying, the torture of prisoners in the U.S., new laws outlawing abortion, the trial of George Zimmerman who murdered Trayvon Martin, an intensifying world situation, the environmental crisis, and continuing repressive acts by the government are all part of a cauldron of contradictions that are happening in the world right now. This – the actual events in the world, the dynamics driving forward and giving rise to these events, and the potential within those events to develop in all kinds of different directions, including ones favorable to revolution – is the reality. This is the situation the movement for revolution confronts. We'll watch and discuss this section from the film.

***
Those this system has cast off, those it has treated as less than human, can be the backbone and driving force of a fight not only to end their own oppression, but to finally end all oppression, and emancipate all of humanity.
—From the film