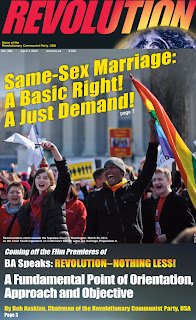 Same-Sex Marriage: A Basic Right, a Just Demand
Discussion based on the article from Revolution newspaper

The U.S. Supreme Court is hearing two lawsuits demanding that the government recognize same-sex marriages. If two adults love each other and want to commit to a marriage, then denying them that right because of their sexual orientation is cruel and oppressive. It is telling them they are less than human in the eyes of society. And every day the government refuses to recognize same-sex marriage is intolerable.

The voices of bigotry complain: “That’s not traditional marriage.” And, they insist, men having sex with men, and women having sex with women is “not natural.”There is no such thing as “natural” sex. In the Bible—if that’s where you want to go—“god” seems to have mandated that at least some men have sex with dozens of wives and mistresses.

Anyone with a sense of basic justice, anyone who hates the oppressive order, a world of exploitation, oppression, and repression, a world of rape, torture, war and police murder... should be outraged that same-sex couples cannot marry. And should be loudly and proudly demanding equality, now!

A Challenge Around Marriage Equality from Carl Dix