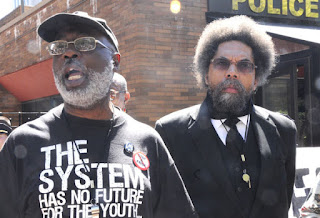 On Monday, May 20, 2013 in New York City with over 500 people in attendance, Cornel West and Carl Dix conducted a compelling dialogue on mass incarceration of youth of color. Cornel West is one of America's most provocative public intellectuals and Carl Dix is a founding member of the Revolutionary Communist Party, USA. Together they co-founded the Stop Mass Incarceration Network in 2011.

This dialogue is a dynamic and substantive conversation between two people on the cutting edge of calling out all the horrors this system inflicts on people all over the world and actively involved in calling on people to stand up and build resistance to them.
Watch, show to friends and family, act now!
Bring people to the bookstore to watch and discuss this dialogue
on Thursday May 30th, at 7 pm:
Mass Incarceration + Silence = Genocide. Act to STOP It Now! with Cornel West & Carl Dix from Revolution Books on Vimeo.