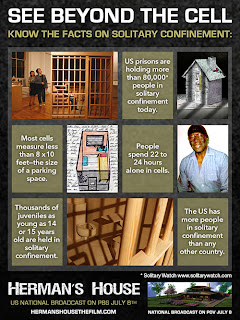 Herman Wallace may be the longest-serving prisoner in solitary confinement in the United States—he's spent more than 40 years in a 6-by-9-foot cell in Louisiana. Imprisoned in 1967 for a robbery he admits, he was subsequently sentenced to life for a killing he vehemently denies. Herman's House is a moving account of the remarkable expression his struggle found in an unusual project proposed by artist Jackie Sumell. Imagining Wallace's "dream home" began as a game and became an interrogation of justice and punishment in America. The film takes us inside the duo's unlikely 12-year friendship, revealing the transformative power of art.

COME TO THE SCREENING AND HOOK UP WITH THE PROTESTS IN SUPPORT OF THE HUNGER STRIKING PRISONERS -- GO TO SACRAMENTO ON FRIDAY & DEMONSTRATE AT CDCR HEADQUARTERS!


Friday, July 26th  HUNGER STRIKE DAY19
Protest in Sacramento in Support of the Courageous Hunger Strikers
EVERYONE BRING YOUR SIGNS AND FLYERS IN SUPPORT OF THE HUNGER STRIKE
7:30 AM meet up and Leave from  MacArthur Bart
10 AM Gather in Sacramento at Fremont Park at 16th and “Q" St. Sacramento 95814
11 AM, Rally and Press Conference, California Dept. of Corrections,  1515 “S" St. 95811
12 N to 1 PM, Bannering/leafleting at the State Capitol Building.
1PM to 3 PM, taking the Hunger Strikers’ 5 Demands and “Agreement to End Hostilities" out to the neighborhoods  in Sacramento.