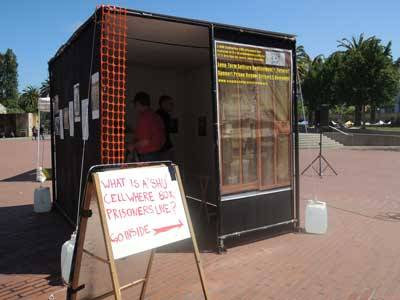 “A hunger strike is not taken lightly by us, we are not suicidal, rather we hope to save lives. We may not be able to save our lives. But we have come to identify our existence in SHU as a conveyor belt leading into an oven of inferno. And we may indeed be strapped onto this conveyor belt with no way out as we have continued for years to watch our comrades fall into the abyss of the oven in psychosis, suicide or other chronic illness. And we may not be able to stop our ride from dropping us into the abyss but we will stop this conveyor belt for future generations to come. Today this ride stops!” (Excerpt from a letter to Prisoner Hunger Strike Solidarity Coalition by a prisoner dated July 8, 2013)
Stop Mass Incarceration Network
Mass Incarceration + Silence = Genocide

Protest in Sacramento in Support of the Courageous Hunger Strikers

EVERYONE BRING YOUR SIGNS AND FLYERS IN SUPPORT OF THE HUNGER STRIKE
7:30 AM meet up and Leave from  MacArthur Bart
10 AM Gather in Sacramento at Fremont Park at 16th and “Q" St. Sacramento 95814
11 AM, Rally and Press Conference, California Dept. of Corrections,  1515 “S" St. 95811
12 N to 1 PM, Bannering/leafleting at the State Capitol Building.
1PM to 3 PM, taking the Hunger Strikers’ 5 Demands and “Agreement to End Hostilities" out to the neighborhoods  in Sacramento.

As of July 18, day 11 of the California prisoner hunger strike, the Department of Corrections (CDCR) is reporting that 1,457 inmates in 15 state prisons continue to refuse food, and 48 inmates in three state prisons refused to participate in their work assignments. [read entire article]

Think about this, from the film BA Speaks: REVOLUTION—NOTHING LESS! Bob Avakian Live
"Those this system has cast off, those it has treated as less than human, can be the backbone and driving force of a fight not only to end their own oppression, but to finally end all oppression, and emancipate all of humanity."

From Pelican Bay Prison, California
"No longer can we sit idle while we are dehumanized"
July 7, 2013 | Revolution Newspaper | revcom.us

To: Those with Ears and Conscious,
I'm a California prisoner in Pelican Bay's Security Housing Unit. I've been validated as a Member of a prison gang. I am also serving a life sentence for a crime as a juvenile but tried as an adult. What this means is I will likely die here, right here in this Cell. I'm thirty-two. I'm just one of thousands. (read entire article here)

Prisoners Write On:
"What to the Prisoner Is Your Fourth of July?" (read letters from prisoners here)