Rickey Vincent presents Party Music: The Inside Story of the Black Panther’s Band 10-8-13 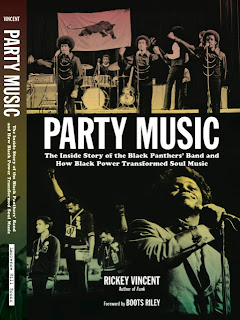 Professor, historian and funk scholar Rickey Vincent, comes to Revolution Books to present his new book Party Music: The Inside Story of the Black Panther’s Band and How Black Power Transformed Soul Music

[The Lumpen was] “a small, short-lived rhythm and blues band that operated out of Oakland, California, in 1970. The group performed for less than a year, but in that short window of time they represented all that was revolutionary about black politics and black culture in that era.”

“This book explores the soul of the black power movement. It puts faces to the revolution and seeks to humanize the black revolutionaries of the day. This book is for anyone who recognizes the transformative soul power of James Brown but still can’t find his name in their civil rights history book. It is for anyone who was fascinated by the fearless vision of change put forth by the leaders of the black power era and has wondered how those ideas came about.” - from the introduction of Party Music


Soul music surged in popularity in America in the 50s and 60s, eventually becoming an indispensable vehicle for the Black Power Movement to reach out to their community and promote their message of radical social change. Largely forgotten today, the Black Panthers had their own funk outfit called The Lumpen.

Party Music: The Inside Story of the Black Panther’s Band and How Black Power Transformed Soul Music (Lawrence Hill Books, October 2013) by Rickey Vincent explores the black cultural revolution through an examination of the movement’s music and the revolutionaries who danced and fought for their rights. The product of exhaustive research, including exclusive interviews with party and band members, Party Music is a political and cultural history offering an insider’s narrative of the Black Panther Party during its crucial transformative phase. It also explores the motives of the great artists and the songs they wrote and performed during that time. Vincent persuasively argues that soul music lends itself perfectly to the cause of a fight for freedom. Lumpen live shows were high energy, call-and-response interplays between lead singer and chorus that invited audience interaction, and the music of the streets blended with the political ideology of the Panthers.


Party Music traces the history of soul from its beginning as a combination of African American gospel with rhythm & blues to its creation of a distinctly black American identity and culture, and illuminates the Black Power Movement in a completely new way, using the radical evolution of music as a framework for new understanding.


Rickey Vincent, Ph.D. is the award winning author of Funk:The Music, the People and the Rhythm of The One. He has written for Vibe, American Legacy, the Los Angeles Review of Books and The Washington Post. He teaches at the University of California—Berkeley, San Francisco State, and elsewhere in the Bay Area. He lives in Berkeley with his wife and two sons.