Get with the Revolution!

There is very developed theory; there is a very visionary and concrete program for a radically new society, aiming toward a radically different world as a whole, embodied in the Constitution for the New Socialist Republic in North America (Draft Proposal); there is a real strategy for making revolution—preparing for and then, when the conditions have come into being, carrying out this revolution—concentrated in the statement "On the Strategy for Revolution"; there is the highest level of leadership we could have, in BA, who has brought forward a new synthesis of communism which involves a whole strategic approach to communist revolution; and there is a core of collective leadership, embodied in the RCP, which is carrying out work for revolution based on that new synthesis of communism. What is missing is YOU. If you are sick to death of the way the world is, and the way so many people are mistreated, counted as less than human and used and abused by the people holding power over us, if you are outraged by the fact that so many of the youth, all over the world, have no future, and that the future of humanity as a whole is seriously threatened by the way this system operates, then YOU have to become part of the initiators of a new stage of the revolution that is needed, part of the new people who step forward to in turn bring forward hundreds, then thousands, who will influence now and eventually lead millions and millions to make revolution when the time is right. What is needed is for you, and many more people like you, in growing numbers, to jump in with this, to become part of building this movement for revolution, and organizing forces for revolution, contributing whatever you can at any point, and winning more people to this, while you continue to learn more about this, and deepen your commitment and involvement as you deepen your knowledge about this. Otherwise, the world will just stay as it is, all the madness and everything people are put through will just keep going on, or get even worse, generation after generation.
Bob Avakian,
Chairman of the Revolutionary Communist Party, USA 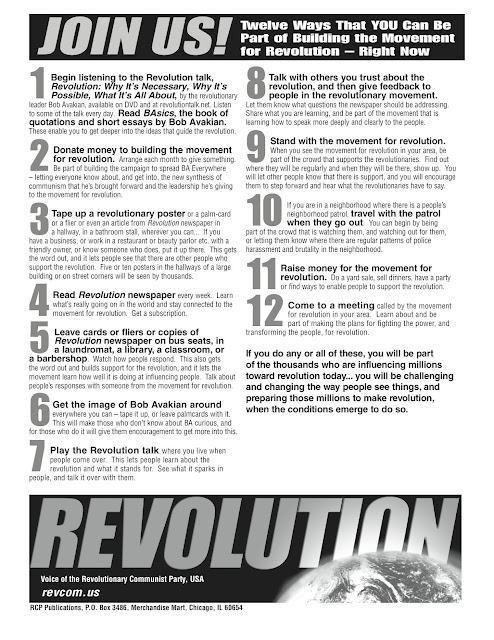