State of EMERGENCY! The Plunder of Our Planet, The Environmental Catastrophe & The Real Revolutionary Solution 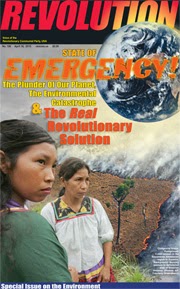 with Larry Everest, writer for Revolution and author of the books Oil Power & Empire: Iraq & the U.S. Global Agenda, and Behind the Poison Cloud: Union Carbide's Bhopal Massacre

Presentation and discussion based on the special issue of Revolution

This emergency has many dimensions:

These environmental problems affect each other, and are already causing certain ecosystems—the complex webs of interacting and interrelating life—to collapse.

But we can do something. People are acting on this now—they are sounding the alarm, they are demonstrating, they are resisting with real determination, they are doing important research, they are thinking through alternate ways of doing things, and they are carrying forward important projects.
These actions are crucial. But ultimately our actions must actually correspond to a true understanding of the causes of the problem, and to the real solution to it.
We'll discuss:
The action—and the inaction—of those who rule this system in pursuit of accumulating more and more profit is devastating the Earth. It is up to us to change the whole system through a liberating revolution.  (See the recent article BA Everywhere: April 2014: Climate Change and Changing the Whole Political Atmosphere)