The video below is a 15 minute excerpt from the program where Elias answers the question
"WHY WAS THIS A GENOCIDE? FATHER JUNIPERO SERRA WAS RIGHT AT THE CENTER OF WITH THESE MISSIONS?"

And this video below is of the complete 75 minute event. 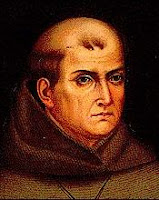 Father Junipero Serra was no "Saint" -  Come Hear Elias Castillo, author of A Cross of Thorns: The Enslavement of California's Indians by the Spanish Missions

On September 23rd,  Pope Francis will hold a mass in Washington DC to canonize Father Junipero Serra, the founder of the California Mission system. The Bay Area is dotted with statues and streets named after Serra.
And every year thousands of tourists visit the Missions which are preserved and enshrined as idyllic places where Franciscan friars and Indians lived in an environment of mutual respect. But this is a myth and the opposite is true.  Revolution Books will host an event with Elias Castillo, author of the book Cross of Thorns, which documents the damning reality - that Serra, the founder of nine
Missions in California was no "saint" and that the Missions were genocidal -- places where Native people were lured and then incarcerated, forced to work, beaten, tortured and where over 60,000 died.

What does it say about the Pope, the Catholic Church and this whole system that it would make a saint of someone responsible for crimes against humanity and genocide?

"A Cross of Thorns" pulls back the veil of lies, deceit, and cover-ups that has

been perpetuated for nearly two hundred years. --Valentin Lopez, chair of the Amah Mutsun Tribal Band of the Costanoan/Ohlone Indians