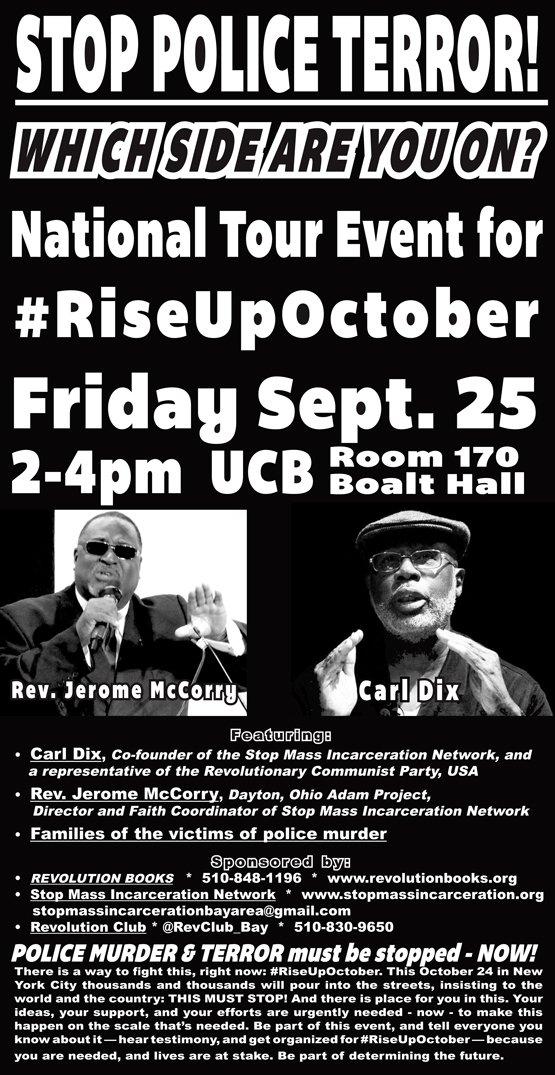 STOP POLICE MURDER! Which Side Are You On?
National Tour Event for #RiseUpOctober
Fri. Sept. 25
2-4pm
UC Berkeley, Boalt Hall, Room 170
Featuring:
Carl Dix, Co-founder of the Stop Mass Incarceration Network, and
a representative of the Revolutionary Communist Party, USA

Families of the victims of police murder, and others
You’ve seen it more times than you can count: a Black or Latino person, at any time, just walking down the street or driving to work or even in their home, has their life snuffed out for no reason whatsoever. Video after video of people with their hands up, people running away, people surrendering, people pulled over for a traffic stop, or doing absolutely nothing but minding their own business—verbally abused, body-slammed, tased, gang-stomped and/or outright murdered, often after they have surrendered. Picture after picture of parents, of partners, of children demanding justice, of a nationwide movement of people pouring into the streets. Time after time, the victim then being demonized and slandered, of authorities claiming “this wasn’t racial,” of killer cops walking free because they claim “they were scared.” No!
How is any of this legitimate? What kind of society tolerates a system that views and treats an entire group of people, based solely on their skin color or language, as suspects, as criminals, and worse—as people having no rights or even humanity which the police are bound to respect? How long must this go on?
Police murder and terror must stop, NOW!
There is way to fight this, right now: #RiseUpOctober. This October 24 in New York City thousands and thousands will pour into the streets, insisting to the world and the country: THIS MUST STOP! And there is place for you in this. Your ideas, your support, and your efforts are urgently needed — now — to make this happen on the scale that’s needed.
Be part of this event, and tell everyone you know about it — hear testimony, and get organized for #RiseUpOctober — because you are needed, and lives are at stake. Be part of determining the future.