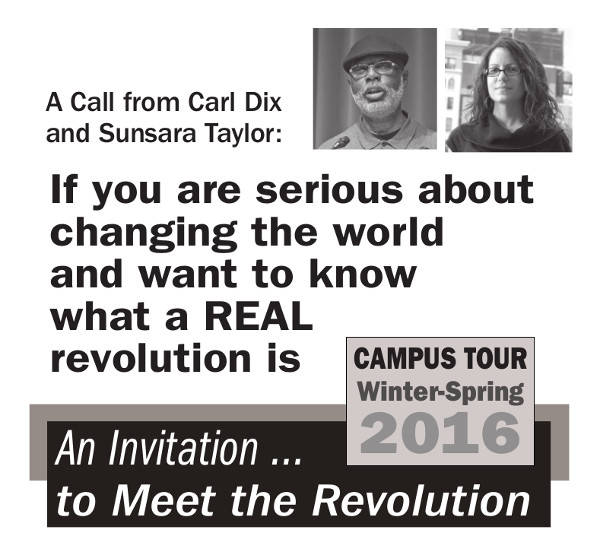 This world cries out for radical change.

Life is a nightmare for billions around the world. Millions cast off their lands by war, poverty,  and environmental devastation. Risking their lives for a different future, only to be further hounded and demonized. Vast sections of humanity trapped in the vise of Western-backed regimes and Islamic fascism. Women in the third world confronting choices of slaving in a sweatshop or selling sex. Being a woman or gay or just "different" too often the cause for being abused and degraded. Being Black or Latino in this society too often the cause for being killed by the police and the system ruling it "justifiable homicide." Yawning gulfs of inequality and a bleak future of environmental catastrophe.

A radically different and far better world is possible - getting rid of this madness and horror, and getting beyond a world of oppression, exploitation and domination. This will take an Actual Revolution.

"Revolution" and "socialism" are in the air, promised through the ease of a ballot or a $10 online donation to an electoral campaign.  But a real revolution - one that aims to change the world - is radically different, and yes, more demanding. A real revolution requires a scientific understanding of society and how to radically change it. That science has been qualitatively developed by the revolutionary leader, Bob Avakian. We're coming to your campus to get into this with you.

A real revolution requires organization. We're coming to your campus to invite you to be a part the movement for revolution.  A real revolution must aim to emancipate all of humanity - not just reforming but getting rid of this monstrosity of a system of capitalism-imperialism, and replacing with a radically different economic, political and social system, a genuine socialist society aiming for a world without social divides and exploitation and oppression, a genuinely communist world.

This is a complex process. How do we even identify and understand the real source of the problems we face, and the real way out of this?  What about the oppression of Black people, of women, of immigrants - and how does that relate to the history of this country, the nature of  this system - and can we get beyond this? What can we learn from past attempts to make revolution and radically change society - positively and negatively? How do we unleash the
conscious initiative and creativity of millions who are to make history - especially when this system keeps us divided, and blind to its dynamics and workings?

There's answers to these questions, but you're gonna have to dig.  We're on tour to engage you on these answers, and to get into - and to recruit you into this-the actual revolution.
The leader of this revolution is Bob Avakian, BA.

BA is the architect of a whole new framework of human emancipation, the new synthesis of communism. This is based on more than 40 years of work, drawing from both past revolutionary experiences and theory, and from science, history, culture and politics. He has qualitatively advanced the science of communism, applying a thoroughly scientific method and approach to the dynamics of society and its transformation. He has developed the strategy and theory for revolution in this current
era, including in a country like the US. He has developed a concrete and viable vision
for what comes after the revolution, in the Constitution for a New Socialist Republic of North America.

As a leader, BA embodies a rare combination: someone who has been able to develop scientific theory on a world-class level, while at the same time having a deep understanding of and visceral connection with the most oppressed, and a highly developed ability to "break down" complex theory and make it accessible to the masses of people.

What we say will challenge you. We're going to go against a lot of what you have been taught to think is true... it will not be comfortable. But if you are serious about really changing this world, you have a responsibility to check us out... to BE challenged.

At the same time, even as we wrangle, we want to involve you in fighting the power today, in
struggles we call the 5 STOPS - to STOP mass incarceration and police brutality, to STOP the
oppression and degradation of women, to STOP the wars carried out by the government, to STOP the wanton environmental destruction, and to STOP the heartless attacks on immigrants.

There is the science, the strategy and the leadership for an Actual Revolution. What is needed is you.  We are coming to your campus so that together we can find the ways for you to be a part of the movement for a real revolution.  There will never be a revolution without students playing a crucial role. All of you, in one way or another, are figuring out the world and weighing what your lives will, or should be about. What you learn and what you do matters greatly - today, and for a future where humanity could really flourish.

Carl Dix is a courageous freedom fighter from the 1960s who went on to become a revolutionary fighter and a communist. Dix spent two years in military prison for refusing to fight in the unjust Vietnam War. He emerged unrepentant and went on to become a founding member of the Revolutionary Communist Party (RCP), USA, dedicating his life to the emancipation of all humanity. Today, Carl is a follower of and advocate for Bob Avakian, his leadership and his visionary new synthesis of communism. Carl Dix and Cornel West co-founded the Stop Mass Incarceration Network (SMIN), and Rise Up October that
brought thousands into the streets in New York City demanding a stop to police terror.

Sunsara Taylor is an ardent follower of Bob Avakian, a fighter for his leadership and the new synthesis of communism he has brought forward, and a revolutionary communist. She writes for Revolution newspaper (www.revcom.us). As part of preparing for revolution, she has led resistance to this system's imperialist wars of aggression, against police terror and mass incarceration, against religious fundamentalism, and against all forms of the enslavement and degradation of women. Taylor is the key initiator of End Pornography and Patriarchy: The Enslavement and Degradation of Women (StopPatriarchy.org), uniting people from diverse political perspectives to stand up against the war on women, including the Abortion Rights Freedom Rides across the U.S.