On the Rise of Donald Trump... And the Need for and Possibility of Real Revolution 3-17-16 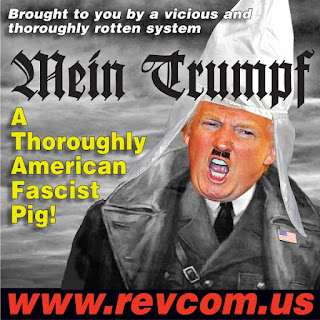 - we recommend these three articles:
On the Rise of Donald Trump... And the Need for and Possibility of Real Revolution

A Serious, Scientific Approach to What Gave Rise to Donald Trump:Some Works by BA on How We Got To This Situation—And the Possibility of Something Far Better

Donald Trump is three things.
One: Trump is the perfect representative of the ugliest, most rotten, most parasitical, and most corrupt parts of the already extremely ugly, vicious, and oppressive American empire and the social values that embody that empire.
Not only his political stances, but the whole way he moves through life—the bullying, the sleaze, the worship of and glorying in money, the pride in ignorance, the crude chauvinism of “USA Number One,” the leering nastiness toward women: this is exactly where the so-called American Dream leads. He embodies the exploitation and plunder that is capitalism, and the me-first mentality it spawns. He is an extreme expression of that, but an expression nonetheless. This is what people are conditioned to want and to follow in this society. And this is what strikes a deep chord in the hard-core followers of this braying, pig-headed jackass.

Two: Trump has pulled together a section of the fascist movement in America in a much more visible and aggressive way. He is organizing those who feel left out and “disrespected,” who have been taught that their white skin and American identity make them special but who don’t “feel special” anymore, and who blame it on those they have been taught to despise as being “beneath them” in society. This sense of frustrated “white male entitlement” runs deep in the marrow of white America; it is openly played on by the Republicans and “politely respected” (while being played on its own way) by the Democrats—and now Trump has taken it to a whole other level. He is aiming these angry people at immigrants, at Black people—against, in short, the most oppressed; he is aiming them against “foreigners” and “the different,” and in particular against all Muslims: and he is aiming them against anyone who would refuse to go along with the crimes of this system or who even dares differ with Trump. He stirs “his people” up with a vision of America rampaging, murdering, and openly torturing all around the world—open, crude, unapologetic gangsterism, as opposed to the “refined” gangsterism of Obama. His rallies are not complete without some of his minions mobbing and beating up anyone who would dare to raise a voice against this, to the raucous cheers of the mob that Trump has summoned. And should anyone criticize Trump online, he has millions of followers who, piranha-like, create a “virtual mob” to go after them.

In doing this, Trump has swept in many people who may not be dyed-in-the-wool reactionaries, but whose dissatisfaction and yearnings, coupled with their naiveté and even more than that the historic advantage and status afforded them as “white people” in America, make them susceptible to Trump’s appeal—which makes him all the more dangerous.
All this and what it says about the larger society, even if there were nothing else (and there is plenty else), concentrates the need for a real revolution. [read entire article HERE]