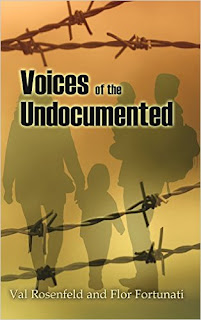 Val Rosenfeld & Flor Fortunati
present their book:
Voices of the Undocumented
We’re living in a world where 231 million people have left their countries and now live in another.
Where this country stole parts of Mexico, where the border is marked by barbed wire and metal fences

Where immigrants are treated as less than animals, hunted at the border by the Border Patrol, locked up, then sent back to their countries

Where the Obama administration has deported over 2 million immigrants, more than under Bush

For all of these reasons, Revolution Books is hosting the authors of the book, Voices of the Undocumented


What are their stories? Why do they come? What are their lives like here, living in a land where they are scorned and called “illegal?” Voices of the Undocumented brings to life the lives of people who have been forced to live in the shadows of this society because they have no legal status.  These stories give a glimpse into the reality of the lives of the 11 million people who work and struggle to live in the U.S. who are subjected to deportation and exploitation.  Nine immigrants tell their stories about their lives in Mexico, Peru, and Guatemala before coming here and about their lives once they arrive.
Some tell of arduous journeys, walking through the desert to cross the border while hiding from the U.S. Border Patrol.  Some came with visas and overstayed their time limits.  Some left their children behind in their countries - children they have not seen for years.  Their stories are based on interviews done by Val Rosenfeld, an English as a Second Language teacher and Flor Fortunati, a volunteer at the Day Worker Center of Mountain View, California.

From the heartbreaking story of Salvador (an illiterate Mexican farm worker who entered the U.S. illegally four times), to Ernesto (an educated Peruvian womanizer), to the amazing accomplishments of Rocío (a graduate of a prestigious university), Voices of the Undocumented relates poignant accounts of the undocumented workers’ lives.