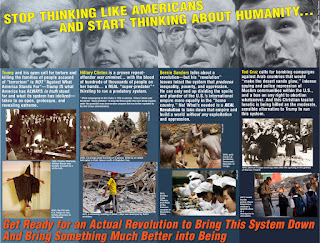 You listened and agreed when Sanders decried the outrageous and grinding inequalities that mark U.S. society....

You nod when Sanders proclaims the mass incarceration of Black and Latino youth to be intolerable, and calls for an end to the war on drugs. And you know that Hillary Clinton and all the rest were neck-deep in that horror till people began rising up. Sanders talks about the need to overcome the oppression of women, gay people, and immigrants, and you feel all that, too. When he attacks the other candidates for having supported destructive wars against other countries and people, and he calls for a different relationship to the environment and goes after the fossil fuel industry—that hits you, too.

More. He says “the system is rigged” in favor of the super-rich. He points the finger at “Wall Street and the billionaire class” and says “they can’t have it all.” He goes after “the 1%” and counts it a badge of honor that the bankers have never asked him to give a speech, let alone throw the money at him like they do at Clinton or Ted Cruz. He says that we need a revolution and that all real change comes from ordinary people banding together and saying “no more.” Sometimes he even talks about “socialism.” When he says “future to believe in,” well, you want that, too—it’s not an exaggeration to say that most of your friends are terrorized when they even think about the shit going on and what the future holds. Sanders says it in a way that seems direct and honest, and seems to be about uniting people and not dividing them.

And then there’s the answer: vote for Sanders....

Now if you think about that for a minute, you might say a “just add water” shortcut approach to revolution is a bit of a contradiction. And you’d be right. If you are one of those people drawn to the Sanders campaign because you feel deeply that the old ways are working against people and we badly need something new, then you’ve got the responsibility to ask yourself whether this really IS what’s needed.

To be clear: We’re not about to tell you to lower your sights, or to “be realistic” in the nay-saying way that just means to go along with the status quo and do what you can on the margins. You probably get enough of that from the Clinton people and your parents. And we’re not gonna tell you to give up your principles—we’re gonna tell you to be true to the best of your convictions and to seriously dig into what it would take to bring about a world in which seven billion humans could flourish. To raise your sights to that.

But first we have to talk about Bernie.

If You're Into Bernie Sanders