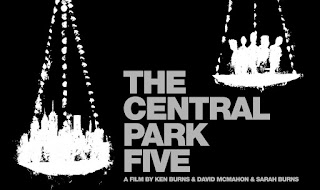 
The film documents the story of five Black and Latino young teenagers from Harlem who were wrongly arrested and then convicted of beating and raping a white woman jogger in New York City’s Central Park in 1989. They were coerced by the NY Police Department into confessing to the brutal crime.  They were viciously attacked in the media nationwide as a “wolf pack.”

Donald Trump took out a signed full page ad calling for their execution. “Bring Back The Death Penalty. Bring Back The Police!” said the ad, and above his signature, Trump wrote: “I want to hate these muggers and murderers. They should be forced to suffer and, when they kill, they should be executed for their crimes. They must serve as examples so that others will think long and hard before committing a crime or an act of violence.” This ad campaign was an important part of creating an atmosphere that justified mass incarceration and the death penalty.

The youth did 6-13 years in prison for a crime they did not commit, before they were exonerated.  This documentary is a must-see in the face of today's police terror.  Sarah Burns, her father, Ken Burns and her husband, David McMahon's film chronicles one major instance of racist injustice in the long and ugly history of this country.