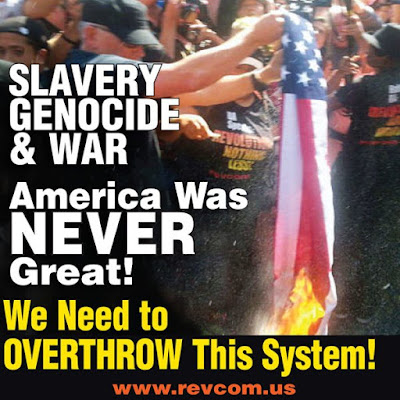 Report back from the RNC and the DNC
with Joey Johnson and the Revolution Club
One Flag Burns—Two Futures Clash
7pm Thursday August 4
The Revolution Club went to Cleveland and then to Philadelphia.   . The Revolution Club has been out in the streets, in the neighborhoods of the oppressed, and among the protesters at both conventions Everywhere they went, they distributed the Message from the Central Committee of the RCP, USA, “Time To Get Organized for an ACTUAL Revolution,” Everywhere they went, they put forward the stand: America Was NEVER Great, We Need to Overthrow This System.
Everywhere they went—they fought for the stand: “American Lives Are Not More Important Than Other People’s Lives.”
They called on people to reject BOTH the Fascist Donald Trump and the War Criminal Hillary Clinton.  To make a powerful statement that “America was NEVER great,” and to expose their view that both Donald Trump and Hillary Clinton are, “Criminal choices of a criminal system that must be overthrown,” they publicly burned the American flag – the symbol of a nation founded and built on slavery, genocide and imperialist war.
Joey Johnson and 16 members of the Revolution Club were outrageously and illegitimately arrested in Cleveland and face bogus charges. They are raising funds for the legal defense and building support for what they did in the streets.  Come hear the Club speak about all this.