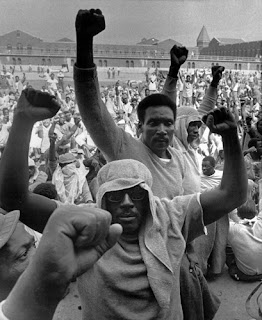 7pm Tuesday September 13 film showing - In commemoration of the heroic Attica Uprising we will show the segment A Nation of Law? from Eyes on the Prize, an award-winning documentary series.
This September marks the 45th anniversary the most powerful and significant prison uprising in U.S. history — the Attica Rebellion. Over half of Attica’s 2,200 inmates, mainly Black but also white and Puerto Rican prisoners, seized control of large parts of the prison, taking 38 guards hostage in protest of horrendous living conditions, and the way people are treated by this system.
On September 13th, 1971  NY Governor Rockefeller, backed by the Nixon administration, sent hundreds of police and National Guard into the prison, machine guns blazing - they murdered 39 unarmed people. Attica was an important part of the Black Liberation struggle and revolutionary upheaval of the 1960s.  It speaks powerfully to us today – revealing a government that will murder dozens in cold blood to restore its illegitimate order, and even more, showing the capacity of those cast out and reviled by this society to rise up for liberation and emancipation.

“We are men. We are not beasts, and we do not intend to be beaten and driven as such... What has happened here is but the sound before the fury of those who are oppressed...” L.D. Barkley, one of the leaders of the rebellion and one of those murdered 9-13-71. Click HERE for article from revcom series American Crime.


Eyes on the Prize is an award-winning 14-hour television series. Through contemporary interviews and historical footage, the series covers all of the major events of the civil rights movement from 1954-1985. The segment Nation of Law? begins with the story of the FBI's COINTELPRO  and its vicious 1969 murder of Fred Hampton, a 21 year old leader of the Black Panther Party.