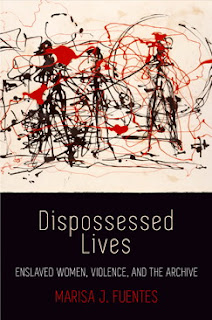 In the eighteenth century, Bridgetown, Barbados, was heavily populated by both enslaved and free women. Marisa J. Fuentes creates a portrait of urban Caribbean slavery in this colonial town from the perspective of these women whose stories appear only briefly in historical records. Fuentes takes us through the streets of Bridgetown with an enslaved runaway; inside a brothel run by a freed woman of color; in the midst of a white urban household in sexual chaos; to the gallows where enslaved people were executed; and within violent scenes of enslaved women's punishments. In the process, Fuentes interrogates the archive and its historical production to expose the ongoing effects of white colonial power that constrain what can be known about these women.

Fuentes recovers stories about otherwise invisible and forgotten urban enslaved women as they moved through space, navigated the violence of slave society, and negotiated a town that was predominantly female. In this work, Fuentes asks us to consider how to challenge the histories of the powerful and shows, throughout the book, that the historical lives of the powerless requires particular care and an ethical practice or recovery.