poster & flyer
"What the Trump/Pence Victory Means for Women" 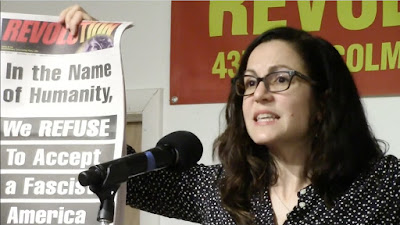 12-8-16 THURSDAY 7pm,
We will show a video of this talk by Sunsara Taylor at Revolution Books NYC on Nov. 30th.  Sunsara Taylor is a writer for Revolution newspaper. Revolution Books in New York City said about this talk that, "Trump is a walking embodiment of rape culture-bragging about sexual assault, crudely degrading and insulting women and girls. Pence is a Christian fascist theocrat determined to criminalize abortion, deny birth control, and legalize bigotry against LGBT people. Together, their victory represents an unprecedented threat against women. They must be met with massive, determined resistance."

After watching the video we will discuss what we have to do to stop the fascist Trump and his regime. To read more: What Trump's Victory Means to Women: Unparalleled Danger and the Need for Massive Resistance an article by Sunsara Taylor in Revolution newspaper