The “Alternative Facts” of Donald Trump vs. the Truth 2-16-17 Thursday 7pm 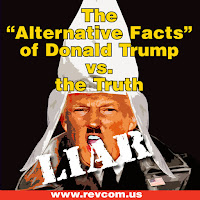 A discussion drawing on Bob Avakian's work on questions of method and science, particularly "A Leap of Faith" and a Leap to Rational Knowledge: Two Very Different Kinds of Leaps, Two Radically Different Worldviews and Methods

Donald Trump has been going after the truth.  He lied about Mexicans.  He lied about Black people.  He lied about immigrants.  The list goes on - he lies about matters big and small; he tells hard cold lies in the face of evidence.  There is a method that runs through this – it works to inculcate in his followers the conviction that the phony, upside-down version of the world that Trump creates is actually real and worth fighting for.  And to raise doubts among those not his followers as to whether reality is even knowable.

But there is a “real world out there” and it can be measured, probed, tested analyzed and understood.  There is a process of observation, study, testing of ideas, summing up evidence and discovering the patterns within that and why they happen that contributes to real knowledge.  There is a way to find out what is true and what is false – the scientific method.  With this method, and the truths it reveals about reality and the possible pathways through which it can be changed, humanity’s horizons open up, a better world IS possible.