EMERGENCY TEACH-IN NYC 'LIVE' SIMULCAST: Fascism in America Could it Happen Here? Is it Happening Here? 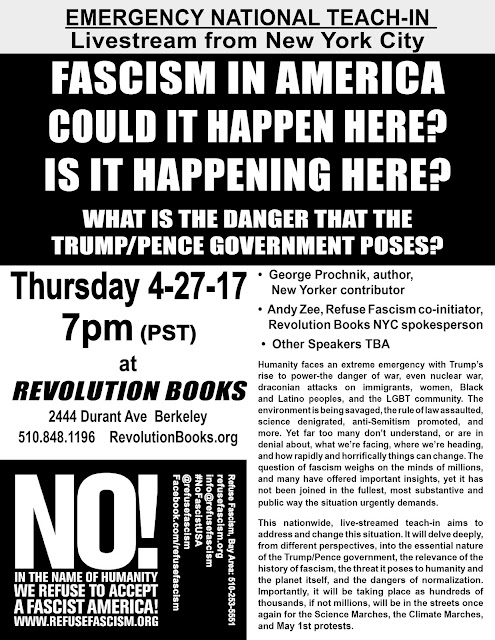 Humanity faces an extreme emergency with Trump’s rise to power-the danger of war, even nuclear war, draconian attacks on immigrants, women, Black and Latino peoples, and the LGBT community. The environment is being savaged, the rule of law assaulted, science denigrated, anti-Semitism promoted, and more. Yet far too many don’t understand, or are in denial about, what we’re facing, where we’re heading, and how rapidly and horrifically things can change. The question of fascism weighs on the minds of millions, and many have offered important insights, yet it has not been joined in the fullest, most substantive and public way the situation urgently demands.

This nationwide, live-streamed teach-in aims to address and change this situation. It will delve deeply, from different perspectives, into the essential nature of the Trump/Pence government, the relevance of the history of fascism, the threat it poses to humanity and the planet itself, and the dangers of normalization. Importantly, it will be taking place as hundreds of thousands, if not millions, will be in the streets once again for the Science Marches, the Climate Marches, and May 1st protests.