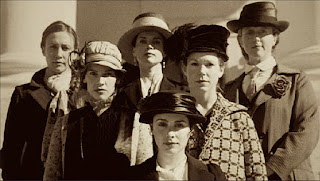 Directed directed by Katja von Garnier, Iron Jawed Angels dramatizes the final years of the American women's suffrage movement, from 1912 to the winning of the vote in 1920. Tensions between veteran activists and “new suffragists” are at the heart of the film which tells the true story of how defiant and brilliant young activists, Alice Paul and Lucy Burns took the women's suffrage movement by storm, putting their lives at risk to help American women win the right to vote.