Readings from Bob Avakian’s memoir: on growing up in Berkeley and becoming a revolutionary 6-17 sa. 3pm

Readings from Bob Avakian’s memoir: on growing up in Berkeley and becoming a revolutionary

At a time when fascists have targeted Berkeley because of its radical legacy, multiculturalism, and progressive values… when the question is urgently posed: What kind people we are going to be in the face of a fascist regime in power and a rising tide of white supremacist attacks? How we answer that has great stakes for what kind of world we’re going to have. There is much to learn from Bob Avakian’s experience, process of transformation, and moral example. 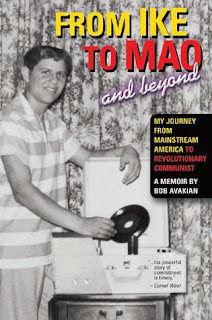 Bob Avakian, the leader of a new stage of communist revolution and architect of a new synthesis of communism, has written a memoir containing three unique but interwoven stories. The first tells of a white middle-class kid growing up in ’50s America who goes to an integrated high school and has his world turned around; the second of a young man who overcomes a near-fatal disease and jumps with both feet into the heady swirl of Berkeley in the ’60s; and the third of a radical activist who matures into a tempered revolutionary communist leader. If you think about the past or if you urgently care about the future...if you want to hear a unique voice of utter realism and deep humanity...and if you dare to have your assumptions challenged and your stereotypes overturned...then you won’t want to miss this book.

”Bob Avakian is a long distance runner in the freedom struggle against imperialism, racism and capitalism. His voice and witness are indispensable in our efforts to enhance the wretched of the earth. And his powerful story of commitment is timely.”
–Cornel West

“A truly interesting account of Bob Avakian’s life, a humanizing portrait of someone who is often seen only as a hard-line revolutionary. I can understand why Bob Avakian has drawn so many ardent supporters. He speaks to people’s alienation from a warlike and capitalist society, and holds out the possibility for radical change.”    -Howard Zinn, author of
A People’s History of the United States