8-3-17 Presentaton & Discussion- A Communist analysis- Fascism - What it is, and what we must do

“democratic” form) and fascism, even if they represent the rule of different sections of this same class. This is what was illustrated and manifested when Obama said of Trump soon after the election that ‘ultimately we are all on the same team,’ even with their sharp differences. “At the same time, fascism is an even more grotesque and openly murderous form of this same system, representing horrors for humanity and the planet, beyond what this system already inflicts every moment…”

“The imposition of different and more oppressive cohering norms in society, the escalated, violent, and viciously cruel attacks on sections of people, the trampling of civil and legal rights, the mobilization of violent fascist social bases, require, contribute to and are part of this dynamic and momentum of the fascist juggernaut. Precisely because of this dynamic, the scope and space for protest and even dissent is undermined by a fascist juggernaut on the move, with a constantly weakening basis for the masses of people to fight, to resist―even as the horrors of fascism accelerate and accentuate! “For these reasons above, the fascist regime needs to be DRIVEN OUT before it consolidates! This is the NECESSITY of the moment!” (“Some Points on Strategic Orientation for the Next Period” by the Central Committee, Revolutionary Communist Party, USA) 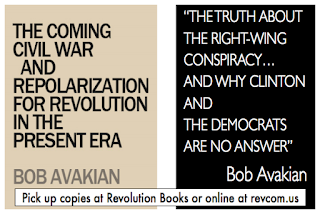