flyer & poster
Special 3-Part Screening of a film of a talk by Bob Avakian that can change how you see the world and what you do with the rest of your life... 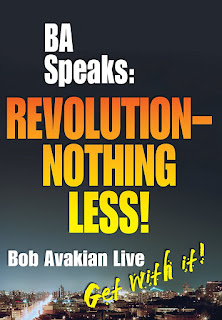 6-8:30pm on:
Sunday Sept 3
Sunday Sept 10
Sunday Sept 17
In the fall of 2012, Bob Avakian gave a series of talks in different cities. This is a 6-hour film of one of those talks.
"Those this system has cast off, those it has treated as less than human, can be the backbone and driving force of a fight not only to end their own oppression, but to finally end all oppression, and emancipate all of humanity."
-Bob Avakian, from the film
"My dear brother Bob Avakian... is the Chairman of the Revolutionary Communist Party... He is one of the few coming out of the 60's who never sold out, he never caved in, he never gave up, held on to his forging of a rigorous, scientific analysis of the objective realities that are driven by a revolutionary love -- because he has such a deep love for poor people, oppressed people, all around the world. Whether you agree or disagree with our brother, one thing you cannot deny: that he is the real thing. No doubt about it." - Cornel West
"Yes, this is a film, but that is not its essence. This is a daring, substantive, scientific summoning to revolution. 6+ hours that can change how you see the world and what you do with the rest of your life. Is this hype? No."
-from one of the filmmakers


Film screening followed by discussion
Donations at the door

More about the film here