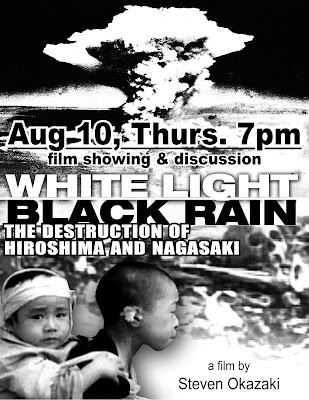 At 8:15 am, on August 6, 1945, a blazing, million-degree fireball suddenly appeared just above the Japanese city of Hiroshima, instantly killing, burning alive, or vaporizing tens of thousands. The U.S. had just exploded the first nuclear bomb used on a population, killing between 140-150,000. On Aug. 9th another bomb was dropped on Nagasaki, murdering 70,000.
WHITE LIGHT/BLACK RAIN by Director Steven Okazaki reveals the unimaginable destructive power of the bombs, the inconceivable suffering and extraordinary human resilience.
Today the U.S. has enough nuclear weapons to equal 400,000 Hiroshimas. The U.S. is the only country that has ever used nuclear weapons in war, it has never said it was wrong to use them, and it has a policy justifying first use of nuclear weapons in future wars.  This is especially ominous under the Trump/Pence fascist regime with Trump's finger on the nuclear button. In the past weeks, Trump/Pence have threatened millions around the globe by deploying attack aircraft carriers and nuclear submarines to the Korean Peninsula, setting up the THAAD anti-missile defense system in South Korea and threatening Iran and other countries.