flyer & poster
Dr. Willie Parker reads from his memoir LIFE'S WORK: A Moral Argument for Choice.  At a time when abortion rights are under attack like no time since the passage of Roe vs Wade, Dr. Willie Parker is performing abortions in several states, and speaking out in this memoir to debunk the reactionary myths around abortion with scientific precision and deep moral conviction. He is a champion of women, an advocate of their rights, their needs, their decisions, their potential.


"No one on earth expects a large, bald black man in sweats and a baseball cap to be a doctor at all, let alone one of the last abortion doctors in the south," Parker writes in his memoir Life's Work: a Moral Argument for Choice. 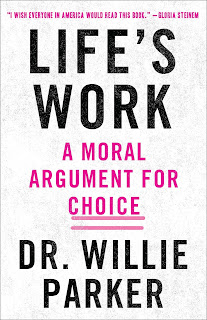 "It says something deep about Life's Work and Dr. Willie Parker, that you learn first not about him, but the women he serves as patients. As a poor southern boy who became a great doctor, he shows us how race and sex bias limit and kill, how possible it is to undo that bias with kindness, and how Christianity might actually include women. I wish everyone in America would read this book."
-- Gloria Steinem

"...a vivid and companionable memoir of a remarkable life." (New Yorker magazine)