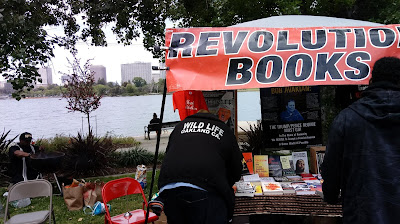 We will have a Rev Books table and a BBQ 12pm-3pm. Look for us on the East side of Lake Merritt on Lakeshore Ave at Brooklyn Ave.
Bring your self, your friends and family, and food to share.. Spread the word to others to come be part of it, and be part of building the revolution.
This memorial day, as the fascist rulers of America rampage toward war on Iran and North Korea, and ALL the politicians vomit all over everybody about honoring the U.S. military, the Revolution Books invites you to The AMERICAN CRIMES Memorial BBQ instead.

We will come together to eat some good food and build community around getting organized for actual revolution that puts humanity first.

We will NOT be honoring the American military and those who have served in it.

We WILL be telling the truth about American Crimes that have been committed against people here and all over the world. From slavery and genocide, to CIA coup d’états and U.S.-backed death squads in Africa and Latin America and Asia that killed millions, to invasions and wars where the USA slaughtered millions, and on and on and on.

We will NOT be “thanking the troops for their service.” Our message to U.S. troops that kill and torture and rape for U.S. empire? FUCK YOU FOR YOUR SERVICE! The troops we honor are the ones who reclaim their humanity by refusing to fight for this country and instead stand with the people of the world.

We WILL inspire people to see their common cause with the billions of people throughout the world in making revolution to overthrow this system. And we will be spreading the word about the revolutionary leader Bob Avakian, who has dedicated his life to working on the problems of the revolution and has developed a New Communism, the understanding humanity needs to make the revolution we need.


---
American Lives Are Not More Important Than Other People’s Lives

Basics 1:5
"It is not uncommon to hear these days, from government officials and others, that only 1 percent of the population is in the U.S. military but that this 1 percent is fighting for the freedom of the other 99 percent. The truth, however, is this: That 1 percent, in the military, is in reality fighting for the other 1 percent: the big capitalist-imperialists who run this country – who control the economy, the political system, the military, the media, and the other key institutions – and who dominate large parts of the world, wreaking havoc and causing great suffering for literally billions of people. It is the “freedom” of these capitalist-imperialists – their freedom to exploit, oppress, and plunder – that this 1 percent in the military is actually killing and sometimes dying for."