From Right Wing Majority to Fascist Majority on the Supreme Court --What’s at Stake and What Do We Need to Do?

Panelists will engage these questions from different perspectives followed by a discussion with the audience: 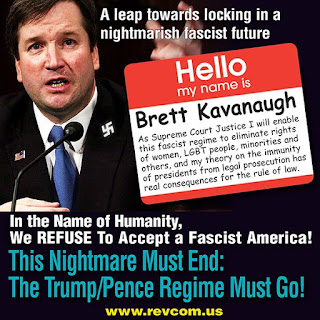 Panelists and audience will discuss, from varied points of view, key questions:

*Who is Trump's Supreme Court nominee Brett Kavanaugh? What is his record and history as judge, a high level operative in the George W. Bush government, and a legal and political hit-man for extreme right-wing causes? What are the implications of his legal philosophy of Constitutional "originalism"?

* In the framework of the on-going assault, from the Trump and Pence regime, against Muslims and immigrants, voting rights and the rights of people of color, environmental protections, the separation of church and state, LGBTQ rights, and abortion rights, what would it mean if Kavanaugh is confirmed? What are the consequences to women if Roe v Wade is overturned? What is Kavanaugh's position on presidential authority, and how would Kavanaugh on the court serve the consolidation of the Trump/Pence regime's position “above the law”?


*What do WE need to do to stop this nightmare? Can we rely on the “normal channels” of confirmation hearings and midterm elections? Or is Revolution newspaper right when it says, "What is needed is not “tough questions” but furious rejection of the right of this illegitimate fascist regime to consolidate its grip on the judicial branch of government, and intense struggle not only to block this, but to drive out the whole regime”?